Thanks very much to all the guests who came along on Friday evening. We enjoyed the evening very much and hope you all did too.

You all certainly unleashed your creativity! These are some of the pictures found on the table at the end of the evening.

Now we have finally finished the washing up two days later, I can update the recipes blog. For those of you who asked for recipes, here is the menu you were…

Firstly, I hope to see everyone this week at Ms Marmite’s underground farmers…

Hi peops,
I do hope to be seeing you all for the Underground farmers and craft market on the 19th of September. There will be some fascinating stalls selling all kinds of food and crafts and also live music! And
Tickets are only £5. There will be lots of supperclubs hosting stalls too.
Please come along:…
Continue

Well ...... is now v. late as stopped off to have a drink and chat with friends & tell them about our wonderful day at Ms Marmitelovers Feast of Assumption - replete, satisfied, happy & relaxed after a wonderful, long afternoon of good food, good company & good fun.

Am now off to sink into… Continue

After years of acting as unofficial resident cook for friends, family and friends of friends we have finally decided to go official as the Thyme Supper Club.

The reason? There are several.

Firstly, we have just moved to a new city where we know very few people. We'd love to make some new friends here and hope that people interested in attending a supper-club-style event are likely to be people with whom we have interests…

Just to let people know and put their minds at rest: I've just paid for continued membership so this very popular Ning group can continue! I also mention this group and the link every time I give an …

Just to let people know and put their minds at rest: I've just paid for continued membership so this very popular Ning group can continue! I also mention this group and the link every time I give an interview in the knowledge that I cannot cater for everyone and people from all over the world want to find out if there are supperclubs near them! If supperclub hosts are doing any press, obviously they want to promote their events but it would be great if you could also mention this group to… Continue

I am confident most of you food enthusiasts have heard of Miles Irving. Miles is the author of The Forager Handbook that has now become a staple on chef's shelves around the country.

The Loft is thrilled to host a collaboration between Miles Irving and the talented and charming chef, Rob Martin, who will be visiting us from Copenhagen.

My boyfriend seems to be intent on spending money assigned for the mortgage on ground almonds, icing sugar and eggs to make the 'perfect' macaron (or macaroon). 6 attempts and no nearer so far. Any good tried and tested recipes out there? The ones he's made look like mini portraits of the elephant man!

The Remoska - Undoubtedly the best piece of Kitchen equipment I have ever bought! 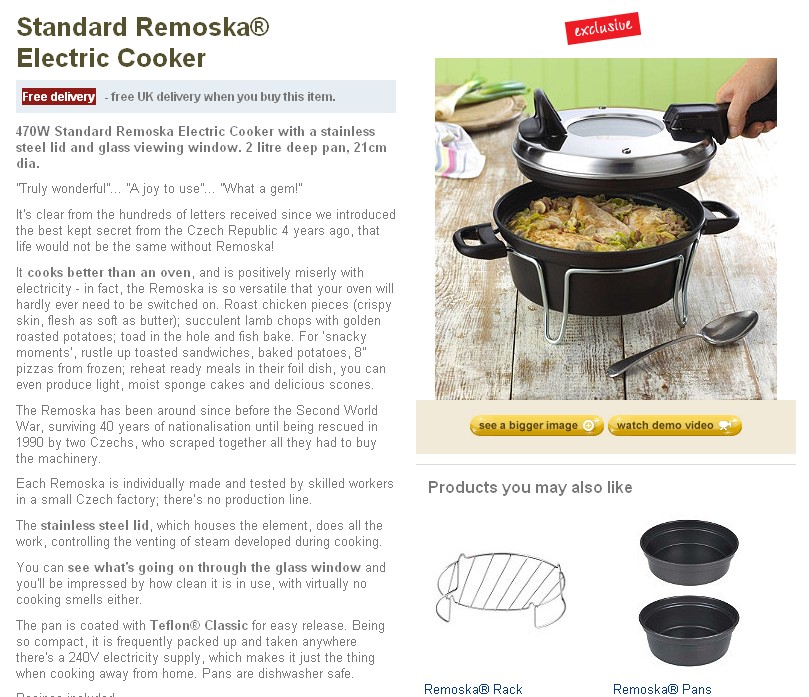 Do you have a house/ large flat to rent out for a month in London?

A lovely couple and their two children are looking for a place to rent in London from August 11th for one month. I've rented to them and they are honest and well behaved. You could charge £500 a week including bills. Quite a nice little sum of money.If you don't have kids at school, you could take that and go away for a month!
If anybody has a suitable property get in touch with me and I'll give you their details.

Hello everyone,
Just recovered from doing Bastille Night, aargh. Never get out the absinthe!
I'm doing another farmers and craft market at The Underground Restaurant in Kilburn on September 19th.
I'd love to have supperclub hosts sell their food on a stall and or do a cooking demonstration. There is no charge to have a stall.
The last one was very successful, featured in the Evening standard and on BBC Moneywatch.
I know it's summer but…
Continue

Izakaya (ee-ZAH-ka-ya) - Japanese pub
Some believe that Izakayas are over due to become one of the biggest Japanese trends abroad since the sushi bar. Izakaya accords equal weight to food and drink unlike the average restaurant or bar/pub which favours one over the other. It is accepted and even expected that you arrive with a thirst as good as your appetite. It is a place to share food and relaxed drinking.
Mark Robinson, who has written the definitive book on Izakayas provides an… Continue

please check out this new supper club, it will be hosted on a converted barge in the shaddow of tower bridge, a truely unique dinning experience, first night is sat 10th julycheck website for reservations, menus and info. www.wearevisitor.com/popup A week ago 16 guests joined us on the deck for a gasto-adventure of summer blockbuster magnitude. In addition to our guests we were visited by one very important person. Dr. Henry Jones took the deck by storm just as the sun settled behind the building he was projected… Continue

I triumphed in my first supper club here at No. 2 Broadgate in the beautiful historic part of Barnstaple, North Devon. The evening was a fabulous mix of great company, beautiful dining room and fabulous food and wine. There were 18 people dining and were treated to a grandiose selection of canapes in the garden betweeen 7 and 8 .30 to start then four courses with a choice of four dishes per course - i was sensible enough to get in pre orders so kept panic to minimum......a few people stayed… Continue

Beware of a TV company offering you a spot

I recently received an email from a TV company offering to do a piece on Sky TV on The Underground Restaurant. The sting was in the tail: they charge you, anything from £300 to £1,500.
I don't think this is kosher.
I've done a bit of TV and while they don't pay you (which is kind of a drag when it's taken up days of your time, and TV cameras and lights bother your guests, make it really hard to be efficient as a cook and host at the same time as being filmed) but you sure as hell…
Continue

Found this excellent recipe that made me laugh - Stuffed Camel:

As you may have seen Ning is going to start charging to have this network. I haven't yet found a better network and in line with my policy of encouraging others I'm willing to pay the fee. I will consider whether or not to charge supperclubs a nominal amount in the future.
Since January 2009 when I started, as the pioneer in terms of reporting, documenting and starting my own supperclubs, I have worked hard not just to promote what I do, but to bring the movement along as a…
Continue

Went to Wing Yip at Cricklewood yesterday and the lobsters were on sale!