The Secluded ZOMBIE Tea Party (Not For The Faint Hearted!) 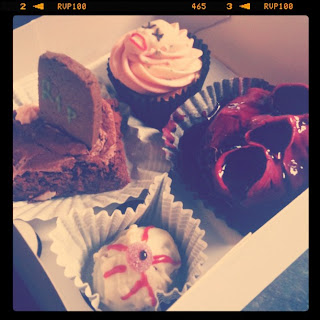 Last Friday, 8th July 2011 saw a version of The Secluded Tea Party that I am pretty confident was ONE OF A KIND evening and not my usual tea party event... We held a Zombie Tea Party for over 18's - due to the nature of the cake and the overall entertainment for this fun and gruesome Tea Party, which was held at the fantastically suitable venue in the form of Apocalypse Paintball in Kneesworth. 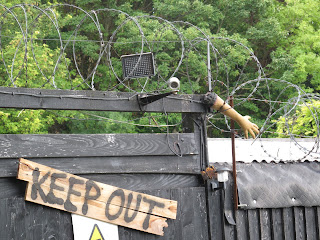 Having sent out the itinerary for the evening and invited my 30 guests to dress up as a zombie or just come as a survivor for the night, they were welcomed by my "parking attendant" (A lovely friend who volunteered to help freak my guests out on arrival ; )  at the main gates, who was to be later "Attacked" by my 3 zombie actors who were lurking in the woods to shake up my guests a little, before we let them through the main gates.
Unfortunately, due to an accident on the main road leading to the woods, we had to do our welcome in two goes, so the second time around, with our second arrival of guests was an even better "Welcome"... allowing my first set of arrivals to get involved and run out of the woods in a larger group to scare them.. Even Better! 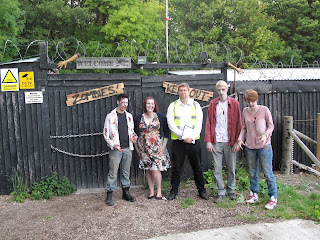 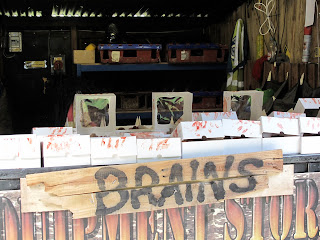 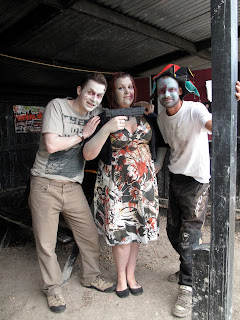 And to make it even more creepy, myself, Sean T Page (My special zombie guest for the evening) and Jamie, the venue owner all opened the gates as the zombies came in for their attack on my guests, and we yelled at them all to get into the compound, wielding guns firing blanks, waving crickets bats and even running towards our zombie attackers with a real chainsaw (Without the chain for health and safety purposes.. but the sound got the guests hearts racing before the evening had even started! Hehe... Evil but so much fun!!) 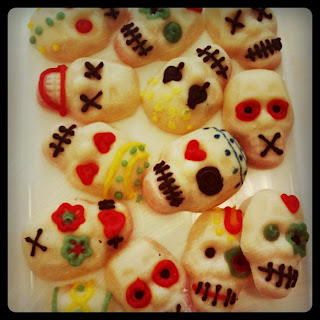 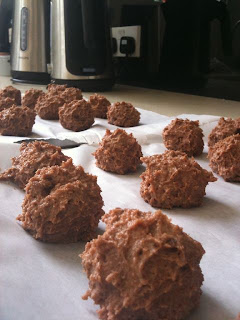 Once we had welcomed my guests into the venue compound, within the safety of it's barbed wire and high metal fences, we all giggled and I couldn't help but hug all of them individually and just thank them all for going to so much effort for the evening. Most of my guests had come in real zombie spirit, dressed in their survival gear or even as more realistic zombies than myself and my helpers were. We were more than impressed with the standard of the zombie outfits and make up they were all sporting. 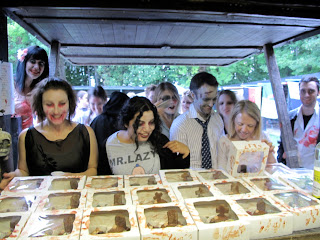 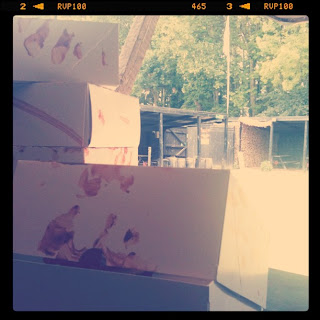 I also can't help but laugh, looking back, that some guests got the train and a taxi to the venue, some even bumping into strange zombies they didn't know on the way there, but all knew they were headed to the same place by their costumes and make up, so they made zombie friends on the journey. How fantastic. Zombies bringing people together hehe. There is something quite funny about this really!
And even better still... some of my hilarious guests even made some mini zombie videos on the way to the zombie tea party.... Have a look if you fancy a giggle!.. These just show what great sports they were! 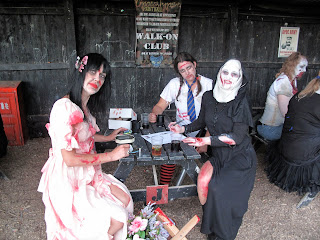 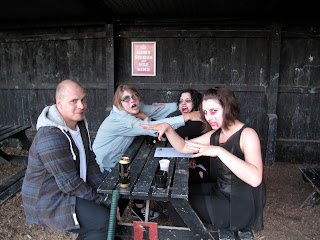 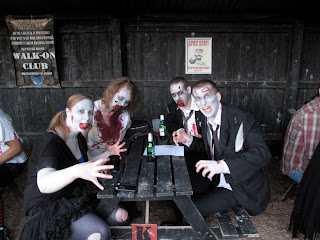 Once my guests had settled in and we had told them that were not really any rules for this evening (!) - Within reason. They could curse, drink, smoke, shout, and eat my gory cake of course!
They all seemed thrilled to hear they had free reign of the venue for the next few hours, and I think this helped to relax everybody and relax after the scares and laughter on arrival. It certainly rebelled against my usual Vintage style Tea Parties with a few more manners and traditional tea party etiquette to proceedings. In fact, it felt quite good to be able to rebel for the evening.... Just for a change ; ) 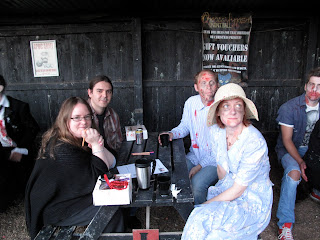 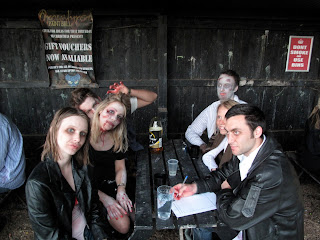 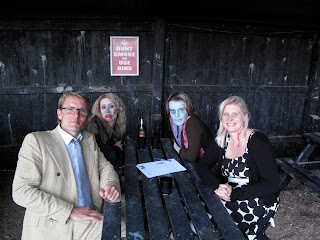 My cake selection was in fact a quartet of gory cupcakes to go with the selection of tea on offer to keep my guests warm this evening. And the boxes were white cupcake boxes with my spattered and bloody hand prints all over them for an authentic zombie feel to these goodies!...
The by-now famous Bleeding Heart Cupcake made by my good friend Emily Rigby of Atomic Cupcakes (And who also rocked at doing up my zombie make up as well as my actors' faces) were in fact formed as delicious Black Forest Cupcakes, a moist chocolate sponge filled with a cherry compote and covered in a cherry sauce to make the *Blood* and fill the delicious fondant valves on the outside.
These were by far the messiest cake, but the most fun for guests to eat and photograph gorging as their zombie alter egos.
In fact, just watching the zombies amble towards me in the servery was bizarre in itself, It was a freaky and very surreal sight I can tell you! 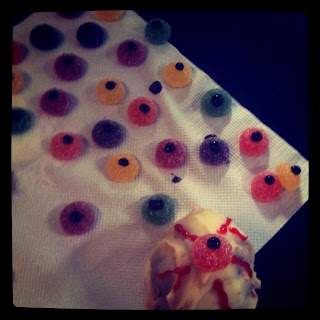 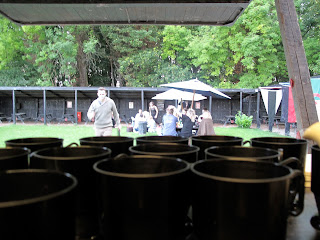 I had also made a very gooey and rich Chocolate Brownie grave, topped with a chocolate Cream Cheese Frosting and Cocoa Powder Soil and finished with a hand shaped gingerbread gravestone.
I also made a vanilla cupcake with an oozing strawberry middle and it was finished with a vanilla buttercream and "Day Of The Dead" Skulls, hand decorated again by Emily at Atomic Cupcakes.
And to complete the quartet, I made up a Red Velvet and Vanilla Cream Cheese Eyeball, rolled in white chocolate and hand decorated by my own fair (And warm hands ; )   ... Again... a great photo opportunity for my guests. I am glad they caused so much amusement and disgust. The two emotions I wanted to stir with this delicious cake assortment. All of these cakes were made in the very spacious Cambridge Cookery School, which was such a pleasure for this work load. Space and dishwashers, my two new best friends in my new kitchen location! 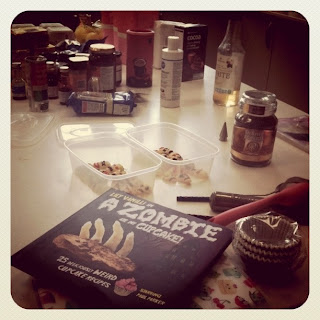 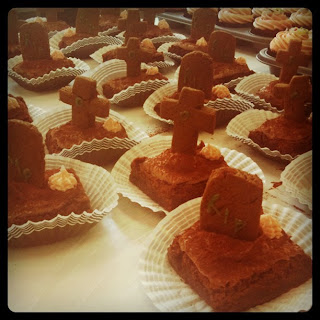 We also put on various versions of zombie entertainment for my guests, and this included a fabulously zombie-cational quiz set by our Zombie Quiz Master and all round zombie know-it-all Mr Sean T Page who was such a great sport and so was his equally knowledgeable partner in crime - His wife - The lovely and very charming Constance. They both offered over an hour of hilarious questions and answers on such topics as the best way to "kill" a zombie (A good blow to the head destroys at least 80% of the brain), which part of the zombie is safe to eat (None, you fool!), what to do if your friend has been bitten by a zombie (Sympathise with her whilst getting ready to hit her with a spade!) and which is the only country in the world to have a dedicated anti-zombie army unit (China!).
I can't thank Sean and Constance enough for their input into this event, and giving myself and my guests a chance to pick their brains on the Z word as well as the chance to buy their book and get it signed by the man in the know. If you haven't got your copy, I suggest you change that to prepare yourself for a potential zombie outbreak... you just never know when it might come in useful. 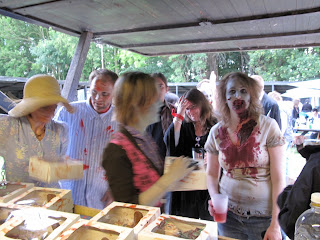 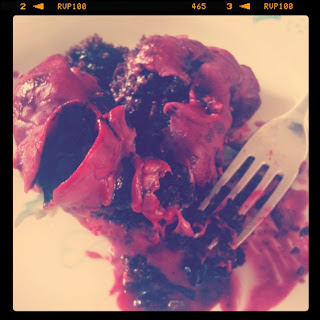 Not forgetting our "Best Dressed Zombie" Competition, which was actually offered to our joint winners at the very end of the evening, and very deserving of the fantastic Zombie-related prize they were too!
The prizes being donated by the Manager of Forbidden Planet in Burleigh Street, Cambridge (Andy, You are a STAR!) who donated the first edition of "The Walking Dead" Comic book and a Shakespeare Zombie Poster for our deserving winners.
We decided on the lovely couple, Kate and Justin, who managed to freak us out the most every time they walked towards us - I can honestly say that if I ever bumped into either of them in the supermarket, I would have NO idea who they were, they were disguised so well. Well done guys and thank you SO much to you all for dressing up and making such an awesome effort for this secretive event! 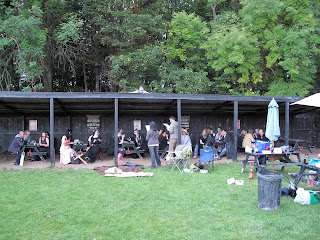 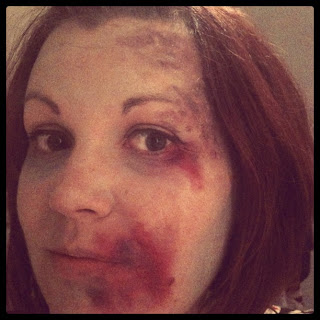 In fact this event has gained so much interest, and so much enthusiasm from myself and my collaborators that there will be another larger indie style Tea Party Event later in the year... so watch this space... I may well rebel again very shortly with a new idea currently being thrown around in my very busy head ; ) 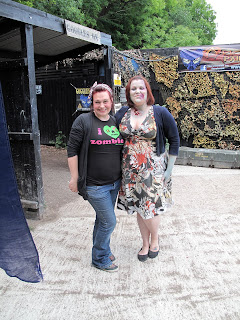 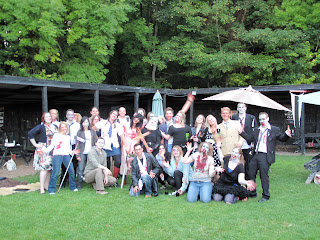 And if this write up just wasn't enough for you... Here are some photos and blog posts from fellow Secluded Zombie Tea Party guests who all seemed to have just as much fun as I did!....
Lee & Lucy's Zombie Tea Party Photographs
And now time to go and keep scrubbing my still-slightly grey Zombie ears and hang up my blood stained tea dress.... for now anyway. 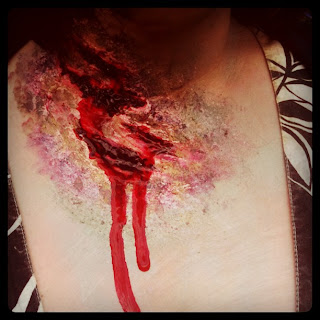 Miss Zombie Flay
x
PS- The next Tea Party will be a much friendlier and less grotesque version... Punting & Picnic and my Al Fresco Tea Party with Letter Lounge UK. Do email me should you be interested in coming along in August : )