IN an article on Jim Haynes supper club in Paris, our site is mentioned as the go to place for finding supper clubs around the world. An app is coming soon...need tech savvie volunteers to work on the data... 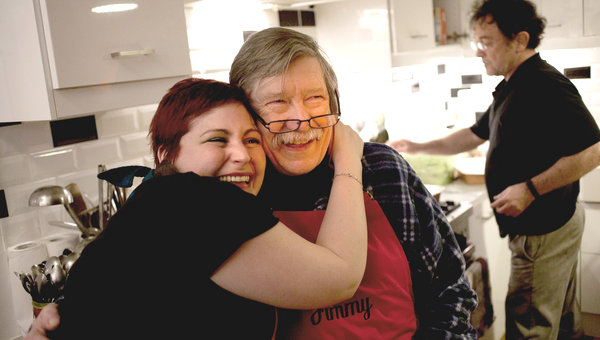 Jim Haynes in Paris with a Canadian dinner guest.

BEFORE Facebook, Couchsurfing.org, and even before the Internet, Jim Haynes was helping the world connect. In the late 1980s, he wrote five travel books, each containing short biographies of people from Russia and Eastern Europe who were willing to accept travelers into their homes.

The introductions read: “This series of travel books will contain none of the usual tourist information that can be found in most guide books. No museums or galleries, no lists of hotels or restaurants, no suggestions on what to see or to do, and no potted histories. Instead we introduce you to over 1000 individuals who live, work, play in the villages, towns, and cities of the country.”

Nearly every Sunday, for the last 34 years, Mr. Haynes, a Louisiana-born expatriate, has opened the doors of his former sculpture studio in Paris and invited the world to come dine in largely the same spirit.

He estimates that more than 130,000 people, from all over the world, have taken him up on this offer. He memorizes their names from a guest list beforehand, then spends the better part of the evening introducing locals to travelers, old to young, and repeats to new arrivals.

Below are excerpts from a conversation with Mr. Haynes about his international supper club.

Q. What do you think attracts so many travelers to your table?

A. I’m in a situation where I have a kind of oasis, a neutral space, in one of the world’s favorite cities. For travelers, I think the idea that you can come to Paris, go into a private home and spend an evening of quiet intensity meeting locals and other travelers is too much to let pass by.

Q. How does your supper club operate?

A. We have a volunteer chef system. I have a Rolodex of 12 cooks. I just call them up and ask who’s ready for the next one. The food changes. The woman cooking this weekend is Russian; last weekend, the chef was Macedonian. The meals are almost always three courses, and there’s always a vegetarian option. There’s a suggested donation of 30 euros, but you give what you want.

Q. Do you think there is something about eating together that helps people meet?

A. There’s no doubt about it. The first 15 minutes people have that deer-in-the-headlights look, but 15 minutes later they’re standing with a plate of food, laughing with someone they just met, or joining a group they find interesting. The food is the glue, but people are the biggest attraction.

Q. Has this idea caught on?

A.There are people in Barcelona, Paris, Chicago, Pittsburgh, Bangkok who’ve been here to dinner and said, “Can I do this in my town?” And I’ve aided, abetted, and encouraged them. The fact that people are doing them elsewhere is pretty gratifying. I feel like Johnny Appleseed.

Jim Haynes is an author, editor, traveler and host, among several other roles. Information about his supper club can be found at jim-haynes.com.

A worldwide list of supper clubs is available atsupperclubfangroup.ning.com/page/supperclubs-worldwide.