the death of sunday lunch

When I decided on doing a daytime secret dinner event, it was because I wanted to replicate the long languorous family meals so prevalent on the continent. Where a large inter generational group get together once a month to celebrate food and community. We all live more nomadic lifestyles these days so more and more of us are bringing up our families without the support of family or a community that we have been rooted in since our own childhoods.

I had a vision for my Sunday lunches that adults would come, eat and talk with other adults, while the children could come and go from the table as they please and make friends with the other children. Everyone would be happy and relaxed. I also hoped that people without children would feel welcome too. Both those that have finished their child-rearing and those who haven’t given family life a second thought.

The first Sunday Roast that I held, I began to see that vision realised in some way. We had three young families, a baby-boomer couple and a single woman. Truly a good mix. The adults that did not have children in tow were perfectly comfortable with the idea of children being there. I was happy with that event and tentatively decided to do another. All the while knowing that it was a deeply controversial idea.

While my evening events book out very quickly, this event has become more difficult to fill. When I asked people why they would not consider attending the Sunday Roast, the feedback can be encapsulated in one sentence “I don’t want to share a Sunday lunch with a bunch of precocious brats”. Which is exactly what I would have said before I had children, so I can completely understand the sentiment.

In my experience children tend to behave badly because a) they’re tired or b) expectations of them are beyond their developmental capacity. Asking a 3year old to sit in a formal restaurant environment for an hour, really is asking a lot. I believe that the supper club offers a more relaxed environment for everyone. Leading to less bad behaviour all round.

As a society we are becoming increasingly insular. Think about it. Who do you socialise with? People from work? Your immediate peer group, most likely. We are spending less and less time with other generations. The people at either end of the generational spectrum are becoming more and more marginalised. Children are seen as feral, overly-sexualised, precocious while older adults are seen as boring or a drain on society’s resources to be carted off into a care home at the first sign of dependency.

When I had my first child at the age of 30, it was a complete and utter bombshell. I hadn’t actually been near a child for 15 or so years. I had no idea what it would be like. Navigating the early years of parenthood is really quite scary when you don’t know anything about children. It's no wonder so many people are making a mess of it.

There is an oft quoted african proverb that states that it takes a whole community to raise a child. So, rather than complaining about society’s ills, join in. Be part of a community and get involved. What you may find is that yes there are plenty of precocious brats out there... but most of them are adults.﻿

It is a shame that people without children shy away from spending time with them. Mono generational I call them. People in their 20s and 30s don't want to hang out with anyone of a different age group it seems.

I know daytime events are harder to fill, but my sunday lunch on the 19th is full fortunately. I too want to reproduce the lunches of my youthful holidays, where you would sit down for 4 hours, and enjoy each course. I did quite a few last summer, and it worked very well when you have a garden, where any children can run off for a while if they get fidgety.

All is not lost. I may try again in the future. The night time thing is good fun, that will be enough to keep me occupied. Looking forward to meeting you this Sunday... slightly terrified too. Your menus look amazing! There will be just seven (unless I get some extra bookings next week) so I'm keeping it simple. Should be good fun. A x

Comment by Honey Wild Supper Club on June 10, 2011 at 10:33
Well said. Though I have an 18 year old and a 6 year old and still want to run a mile from large packs of children. Saying that every supper club I have had has included my 6 year old and some guests with children an 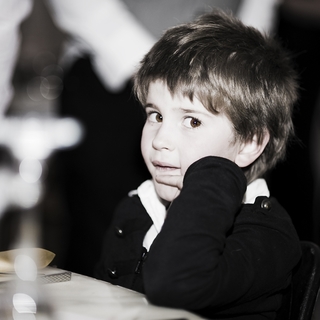 d it hasn't cramped anyone's style. My house is pretty big though and I don't tend to advetise it too much and I defintely thought twice about that for exactly the reasos you have listed. Alot of people without children , in my experience, have set ideas about it in this culture. Look at him, he's a wee cherub, mostly...Karen