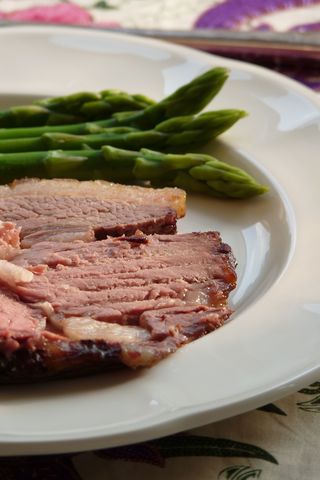 I’ve long been a fan of slow cooking. When I heard about Heston Blumenthal’s ultra slow method of cooking, I was intrigued but put it to the back of my mind assuming that you’d need a science lab rather than a run of the mill domestic kitchen to achieve a good result. My interest was piqued again when, flicking through a copy of the second Leon cook book, I saw Henry’s 18 hour beef recipe. The Leon book is quite clear. If you can’t get your oven to stablise at 60 degrees you can’t cook meat this way.

Armed with my digital dual probe meat thermometer I set off to put my usually reliable Rangemaster Kitchener to the test. The first problem I encountered was that the lowest setting on my cooker is 100 degrees. I chose a half way point between off and 100 and put the probe into the oven. After two hours of testing I could not get the cooker to stabilise at 60. I did find a point where it would, over a 15 minute cycle, achieve a high of 65 and a low of 52.

So here’s the science bit. Collagen breaks down at 50 degrees but cell walls only burst and lose fluid at 60 degrees. If you cook meat slowly at about 55 degrees over a very long period you will get the most tender, pink and juicy meat imaginable. Heston Blumenthal describes the process here, although the science sounds a little bit dubious and it looks like a shampoo advert.

Despite not being able to get a stable temperature I figured that putting the meat into the oven would reduce the gap between these two temperatures. And it did. I put one probe into the meat to ensure that it did not go above 59 or below 50 degrees. The other probe enabled me to keep an eye on the oven temperature which, as the meat reached the 50s, became less relevant.

The fore rib of beef went in at 8pm on Monday night and I took it out at 6pm on Tuesday evening. It was unbelievable, I can honestly say it was the best beef I have ever eaten. It will be on the menu for my first Sunday roast.﻿

Comment by The Old Bakery Supper Club on April 29, 2011 at 22:03
I loved the Beef but my husband really disliked it, strange how different a palate can be xx